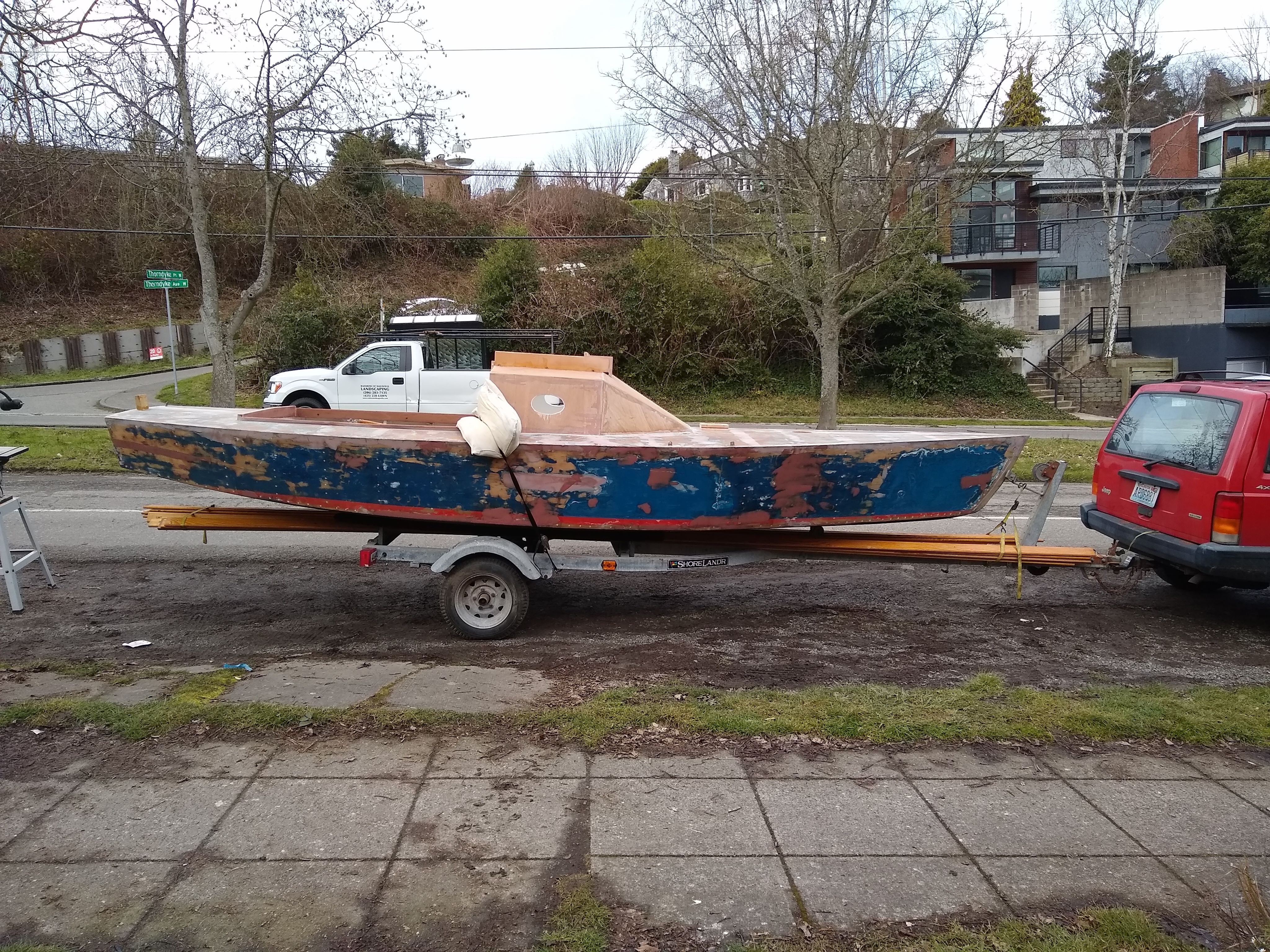 Whew. We’ve moved and finally have internet on our new liveaboard so I can finally post an update.

The Lady Jane now has taken up residence in the yard at the Northlake workshop of the Center for Wooden Boats. 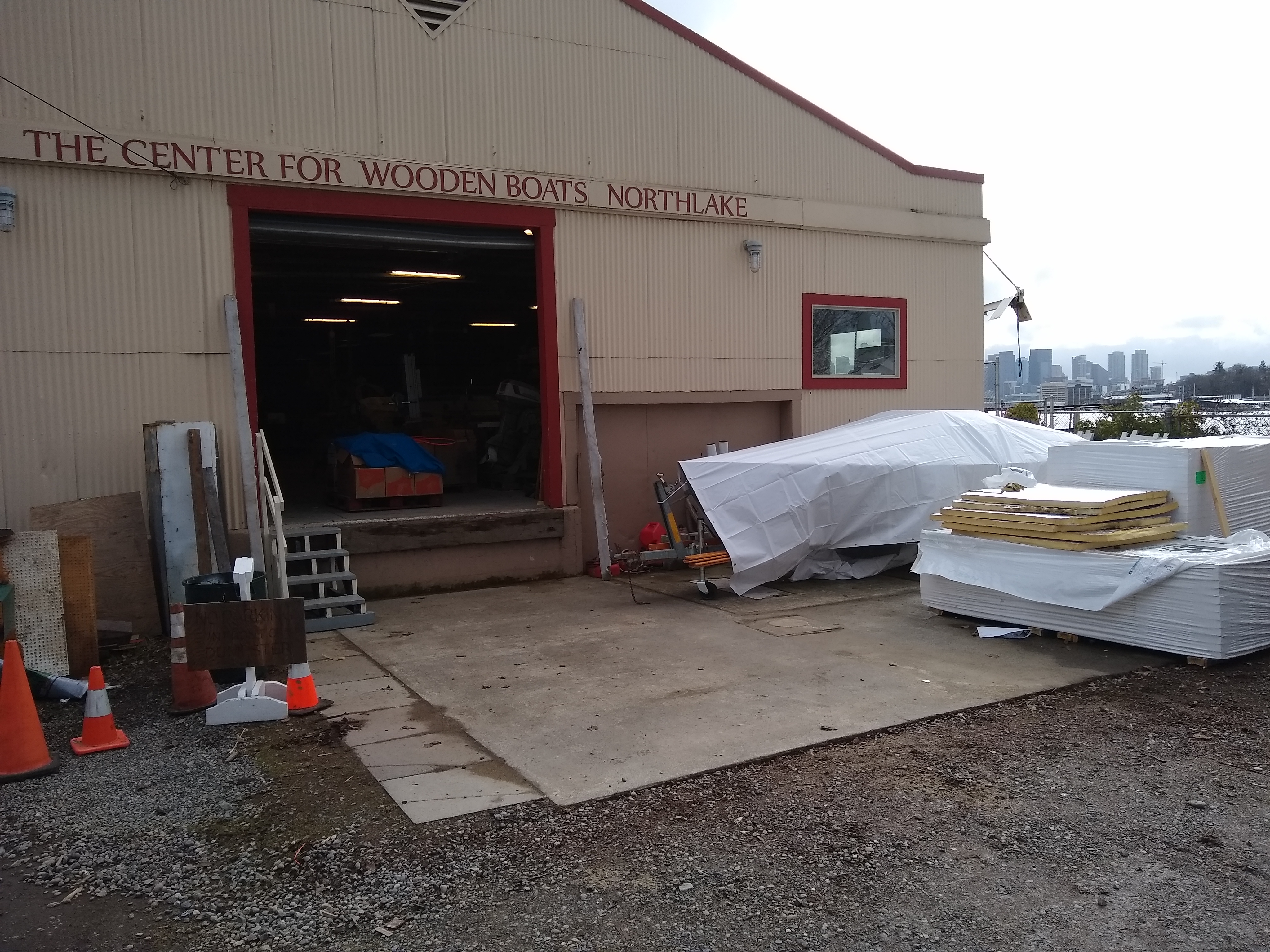 I’m truly happy for their support and for them accommodating me and making it possible to finish her.

On the way over, I just had to snap a shot of her on the trailer; it’s the first time I’ve really had a chance to see her outside of cramped quarters and really look at her lines with the new cabin.

I think the cabin looks great.

Once moved, work continued. I now have all the floorboards for the cockpit and cabin sole cut. This wood was purchased a few months back, a lucky find over at Ballard Reuse. 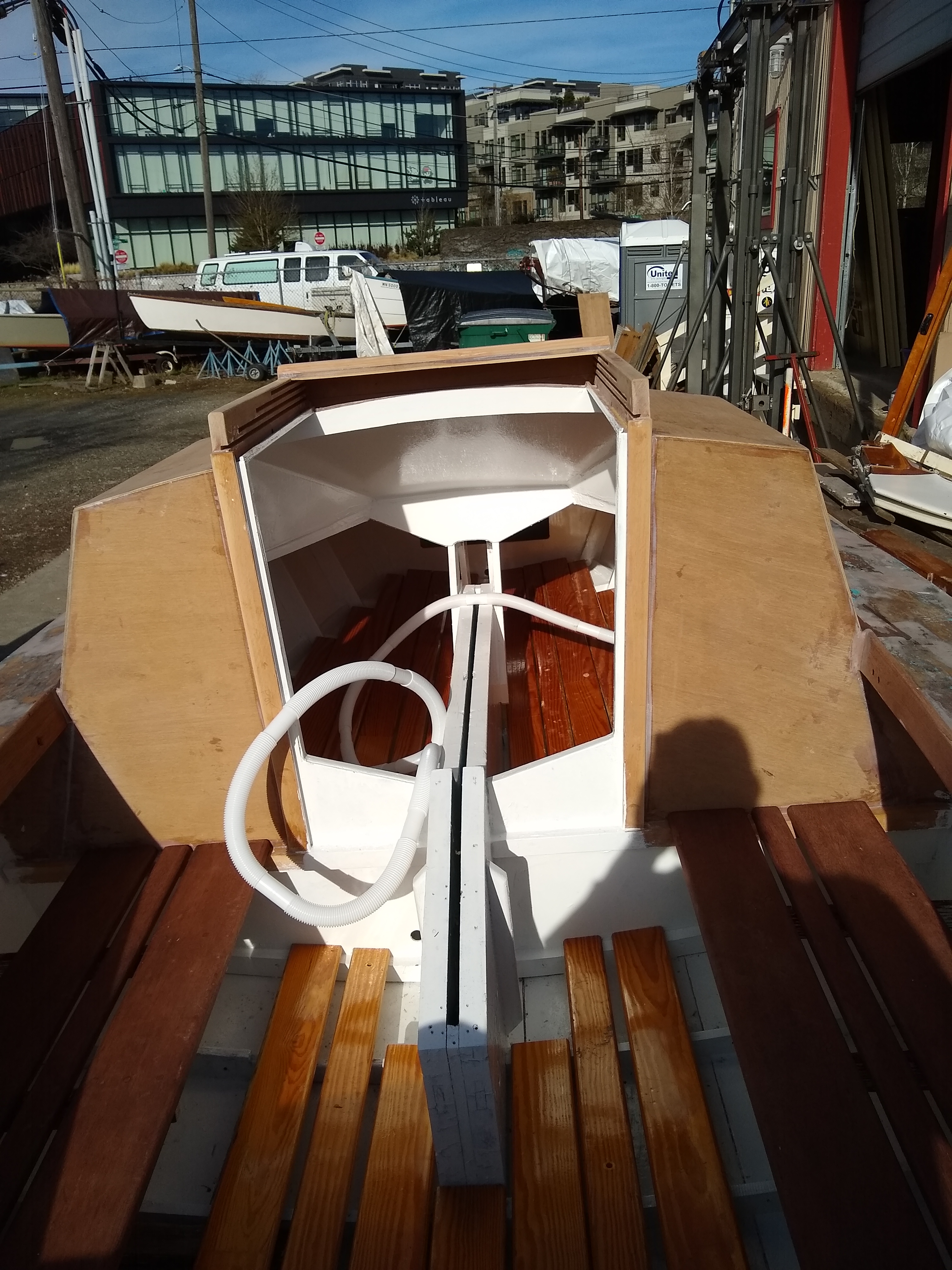 These 20-foot long pieces of pine came from a set of bleachers disassembled out of some school down south of Tacoma, if I remember correctly. Cut to length, these will be revarnished and screwed down to the ribs.

In this shot, you can also see the bilge hose from the mock up of the outflow of the cabin pumps. In the 2017 R2AK when I turtled and self-rescued the Minnow, The 3700 gph crash pump in the cabin made this possible. I’m installing a similar, yet more refined version of that system in Lady Jane. For her, I am installing four 1100 gph Whale Supersub automatic pumps. These pumps are small, compact, and draw down to about 3/8″ of water left in the bilge. two of these are going in the cabin, two in the cockpit. in the above picture you can see where the floorboards are cut to allow the cockpit pumps to be mounted on either side of the centerboard; just forward of the cabin bulkhead another two will be mounted. For the cockpit, The hoses will be routed under the sole and along the sides to the aft corner of the cockpit, then out thru fittings in the side decks. For the cabin, I plan to route them under the sole and forward to thru hulls in the cabin sides.

I went to four pumps for a number of reasons; for one, having one on each side of the centerboard trunk seemed to be a good idea in the cabin, for another, if i have a failure or a clog I have some redundancy built in. if I really need to, all the bulkheads between the watertight flotation spaces and between the cabin and cockpit have drain plugs that can be pulled if needed.

Beyond that, I’m happy to say that very little carpentry work remains. I need to install the backup in the deck for the bowsprit, a backup piece for an overboard on the starboard aft deck, and cut the rub rail. After that, it’s paint and varnish, and then install the deck hardware. Hopefully, the weather forecast for this weekend holds and I can start paint; almost all the fairing is done and paint will make it look a lot more done and give me a psychological boost.

On the R2AK front, I’m starting to wonder.  I applied for the first leg of the 2019 race back on January 15th; the application said to expect to hear from them in two weeks and I still haven’t gotten a call from Raceboss. If I don’t hear from them by April, i may have to make some inquiries.