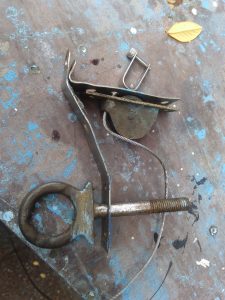 I’ve been looking for a replacement stemhead fitting for the Lady Jane. As it came to me, the boat had a loosely held on amalgum of hardware hanging out of a hole in the deck. It was comprozed of a worn bronze bow loop, two bent up and modified stainless steel tangs, and a brass sheave box for an internally run sail adjustment line. 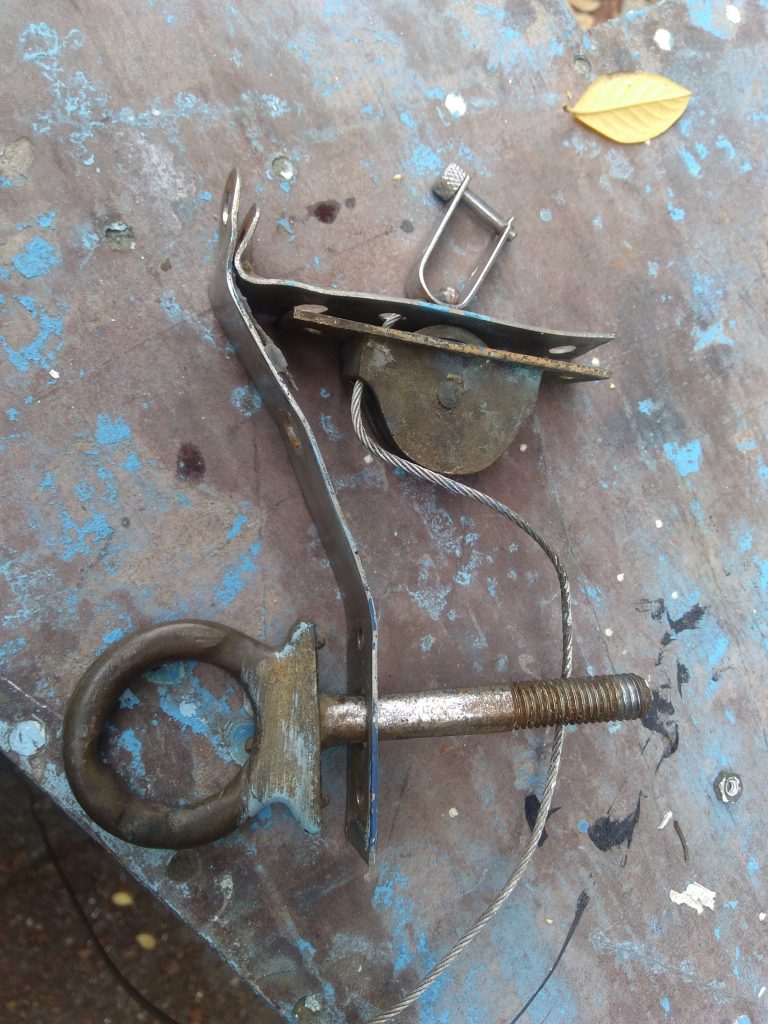 As you can see, hokey. Not something I’d trust, and even if I did I would have had to remove the sheave box as I plan to seal the forward part of the bow into a watertight flotation compartment.

Here we see the hole the sheave box was in to direct a jib downhaul belowdecks. In addition, the stem comes up above the deck. I believe this is because while the 1960’s measurement certificate i got from the class association notes the boat had a 5/8 thick deck, at some point that had been replaced with a 3/8 plywood deck.

I cut a piece of wood to fit the sheave box hole and after coating it and the hole in epoxy I then fit it in the hole with a bunch of epoxy thickened with fairing additive.

I then hit it with my power plane a few times to get it close and finished up with the sander.

I’ll need to fair it in a little more when I do the deck, but the repair is a good starting point.

I also needed to find a stem head fitting to replace what had been on there.

So, I started by looking online. Turns out there aren’t many suppliers for these kinds of things, and as the lightning is a massive dinghy most that are available from racelite and the like are undersized for it. I made inquiries with friends, used parts suppliers and sources but came up empty. I started looking at boats down at Shilshole, walking the docks, still a solution didn’t come to me. I started focusing on small keel boats. I found some descriptions of a stemhead fitting for a J/24, and it seemed like something i could make work.

I joined the J/24 Facebook group, and after a quick post, a week, and $60, I had a stemhead fitting on it’s way to Seattle. I had hoped it was something  I could make work. When it arrived, I was shocked. I set it on the boat.

This wasn’t a ‘This will work with a little modification’ situation, this was a ‘This couldn’t be better if it was custom engineered for this boat’ situation.

The plate even covers the repaired area from the sheave box and is sniped to match the bow’s taper!

Besides this, I’ve also been working on the mast step/centerboard trunk/deck tie in structure and the start of the watertights, but I’ll cover those in their own posts when they get a little further along.