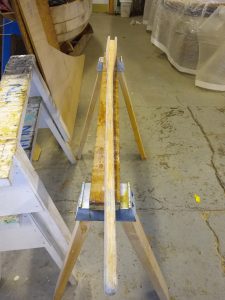 A few weeks back I had started on my tiller/rudder combination, and after sanding and cleaning up the tiller I had chosen to use, I realized it was bent. 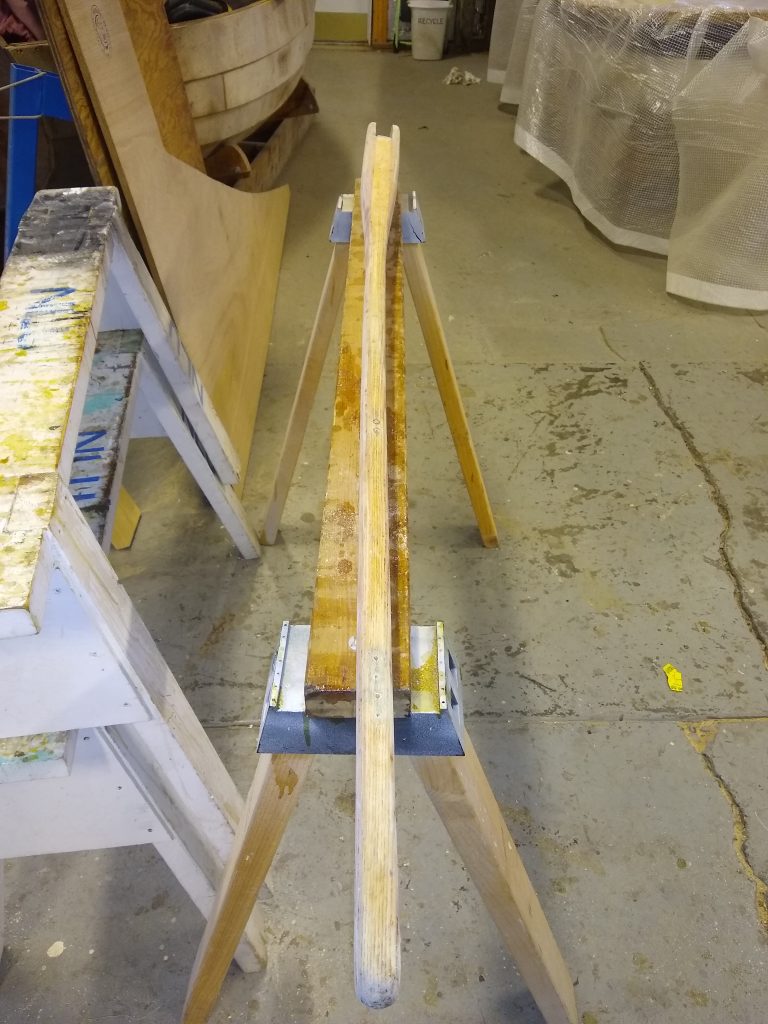 I immediately thought that just putting it in a steam box would straighten it up, as it looked like this was storage damage adn that it originally had been straight.

However, I didn’t really have any way to do this; the workshop I am in has no water except for a rain barrel, and there wasn’t really a good way to boil the water. I’m living on a sailboat, and it wasn’t really possible to do it on the boat either.

So, I tried and succeeded to straighten it cold. Here’s how i did it.

First, I soaked an old towel in the rain bucket, then wrapped it in plastic to keep evaporation down. Then , clamped it to a workbench, bending it slightly past straight.

I then let it sit for 3-4 days like this. Here’s a shot of how it turned out: 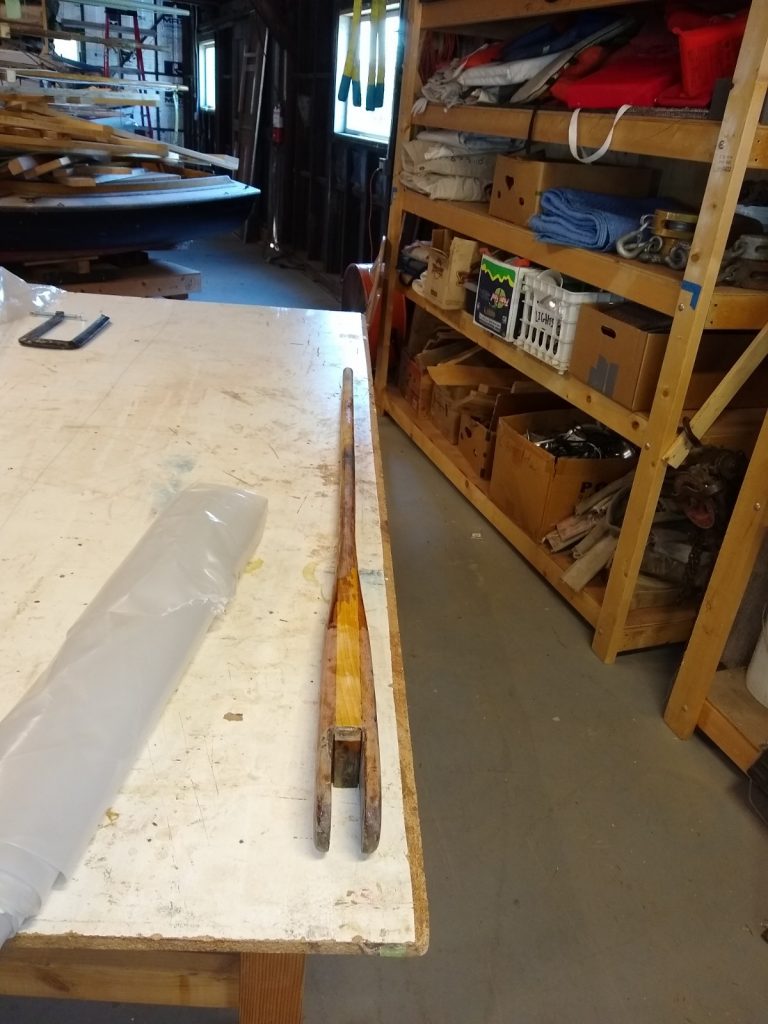 Still not totally perfect, and. i may try and tweak it a little more, but much, much better, and well within what I would consider a more useable set of tolerances.

I went with Ipe for the rubrail. it’s very hard, durable, and everythign you’d want in a rub rail material. I bought a 20′ piece of deck lumber 3/4 inch thick and like 5″ wide from the local Dunn Lumber. at $3 a foot, it was pretty reasonable in cost. I had set up a table saw and cut a 1/2″ thick piece from each side of the board, so I could retain the rounded edges that had been milled into the board. Ipe is also known as ironwood; it’s murder on tools and not having to break these edges was a boon.

The plan for the rub rail was to cut it to 19′ 2″; this is long enough to cover all but the front 6″ of the bow, and have a screw 1″ in from each edge and evenly spaced every foot.

I cut a 45 degree snipe on the back and forward edges, and marked 1″ from the end, then every foot down the leingth of that.

I used two A-frame ladders as a jig, and clamped a small piece of offcut Ipe to the drill press as a fence, so i would consistently drill the center. 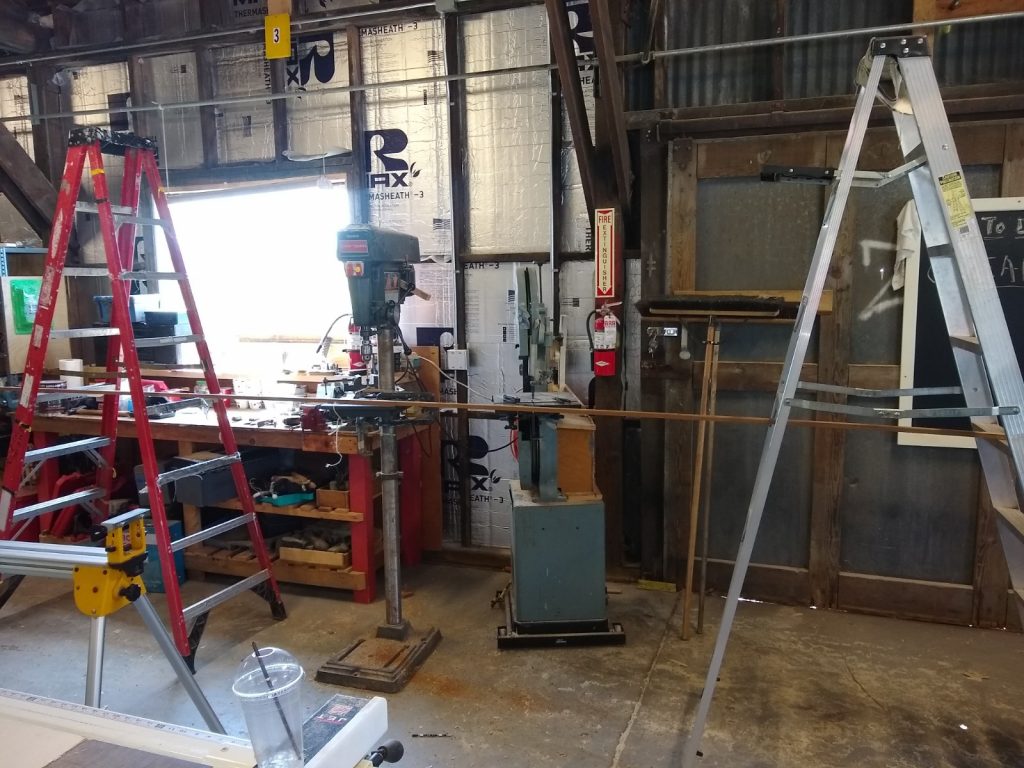 I had to perform three operations on each hole; drilling the initial hole, slightly countersink the back for sealant, and the n countersink the front for the teak bungs I plan to insert.

Ipe is a very had wood; so dense it is heavier than water and doesn’t float. IT also likes to split without warning. So rather than use a tapered drill bit like i normally would with wood screws, I went 1/64″ oversize for the screws i planned to use to 3/16. I drilled the holes with a straight bit, then attached the countersink from one of my tapered drill bits.

Here’s the shot of the setup, drilling the bung counterbores. 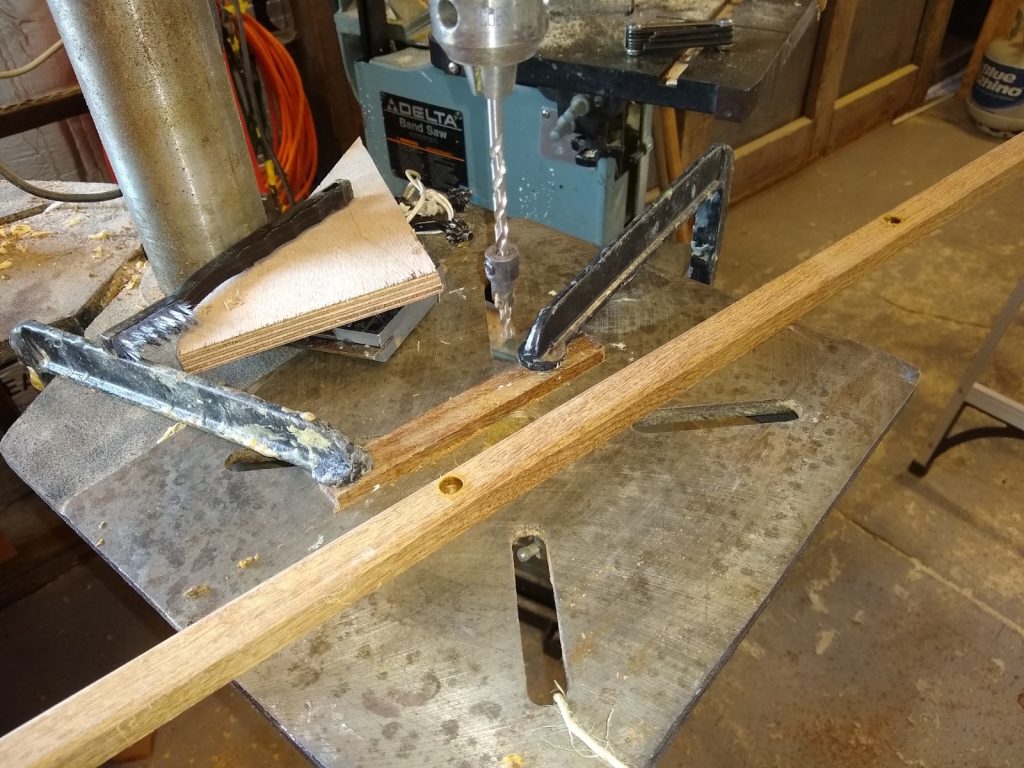 Once I get the hull painted, these will get held into place and I will drill the hull with a standard tapered bit and install the bronze screws and teak bungs. I plan to finish the rub rail in either Simco or Teak Wonder. these are just a sealant, not a varnish so they should keep the rail looking good while not showign damage from bumps and scratches.